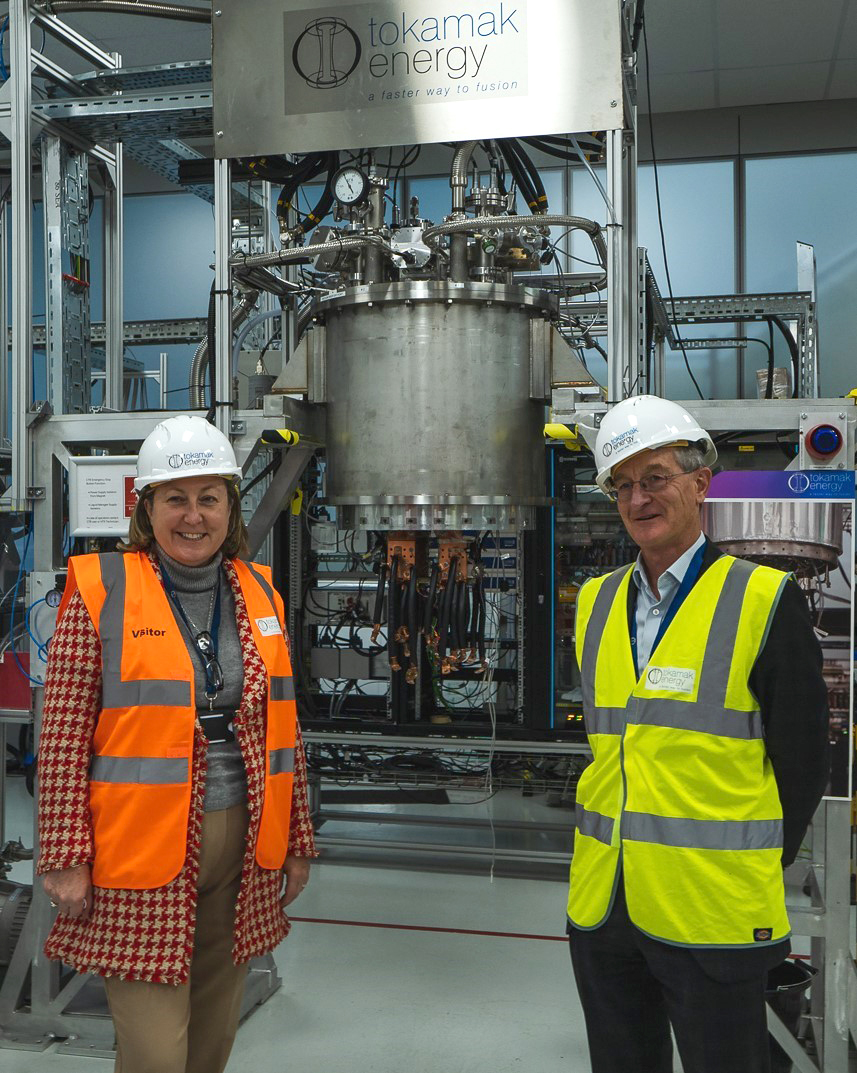 The Minister’s visit came in the run up to the prestigious Global Investment Summit in London that took place last week and aimed to highlight the country’s openness to attracting new investment, with a focus on leading clean technology firms.

Tokamak Energy was one of a small number of leading UK companies chosen to showcase their technology and innovation at the event specifically hosted for global investors.  With plans underway for Tokamak Energy to commercialise fusion in the 2030s, the Summit provided investors with an opportunity to see the company’s potential as it develops the fusion power plants of tomorrow, while commercialising the technology applications of today.

International investors have consistently backed Tokamak Energy, which has raised over £100m of private investment, making the firm one of only four private fusion companies globally – and the only one in the UK – to have received such a high level of funding.

During her visit to Tokamak Energy, the Secretary of State viewed the ST-40 fusion device and visited the development facility for high-temperature superconducting (HTS) magnets.  Anne-Marie Trevelyan also learned more about the company’s plans to commercialise fusion by combining compact spherical tokamaks with HTS magnets.

“We were delighted to welcome the Secretary of State for International Trade to our HQ.  Fusion is of particular interest to the Government now as it seeks to deliver on the Ten Point Plan for a Green Economy and secure trade and investment opportunities for UK plc.  The Global Investment Summit is an important opportunity to showcase how we are pioneering commercial fusion.  We’re working tirelessly to make fusion energy a reality – it’s really positive and we very much appreciate that the Government is supporting us so proactively.”

The Secretary of State’s visit followed recent visits in the summer to Tokamak Energy by the Secretary of State for Business, Energy and Industrial Strategy (BEIS), Kwasi Kwarteng, who opened a new building and the then Minister for Science, Research and Innovation, Amanda Solloway MP.

Tokamak Energy is a leading global commercial fusion energy company based near Oxford, UK.  The company is developing the fusion power plant of tomorrow while commercialising the tech applications of today.

Tokamak Energy is pursuing fusion through the combined development of spherical tokamaks along with high temperature superconducting (HTS) magnets.

In the ST-40 fusion prototype, Tokamak Energy has developed the most advanced compact spherical tokamak in the world – a key enabler of commercial fusion.  Plans are underway for the ST-40 to operate at 100m degree plasma, which will be a key milestone for commercial fusion and the first privately funded fusion module to reach this landmark globally.

Tokamak Energy received five US Department of Energy grants in 2020, creating partnerships with leading expertise in the US National Laboratory System.  The company is partnering with Oak Ridge National Laboratory and Princeton Plasma Physics Laboratory to develop the ST-40.  It has also received a £10m grant from the UK Government as part of investment under the Advanced Modular Reactor (AMR) programme.

Tokamak Energy is working with CERN, the European Organisation for Nuclear Research, on high temperature superconducting (HTS) magnets in developing a proprietary technology that will scale to the large magnets necessary for fusion power modules.  HTS magnets also have applications for particle accelerators, aerospace and for several other industrial sectors.

The company, founded in 2009 as a spin-off from the Culham Centre for Fusion Energy, currently employs a growing team of over 180 people with talent from the UK and experts from around the world.  It combines world leading scientific, engineering, industrial and commercial capabilities.  The company has more than 50 families of patent applications and has raised over £100m of private investment.

Once realised, fusion energy will be clean, economic, and globally deployable – a key enabler for meeting international climate policy goals.

A world first for a private fusion energy company

Tokamak Energy has announced that Sir David Harding has joined its Board of Directors. Sir…

In recent years, Tokamak Energy has completed a series of demonstration projects on a rapid…