15 July 2021, Oxford, UK – Tokamak Energy is announcing today that it is to double its workforce as well as the size of its facility in the UK, in a major expansion drive that delivers a significant boost for UK fusion development and commercialisation.

More than a hundred and sixty highly skilled new roles for scientists and engineers will be created at the company’s headquarters at the Milton Park scientific hub near Oxford, over the next three years.

The Rt Hon Kwasi Kwarteng MP, Secretary of State for Business, Energy and Industrial Strategy (BEIS) visited the company’s headquarters today to recognise this major expansion and to see at first hand the progress that has already been made.

This year, the company, through its ST-40 spherical tokamak, is planning to be the first company in the world to achieve 100 million degrees Celsius temperature in a stable plasma, an essential cornerstone for economic fusion energy. The UK Government has already provided backing to the UK’s efforts to deliver fusion through the ongoing STEP programme and has provided Tokamak Energy with £10m as part of its Advanced Modular Reactor (AMR) programme.

Tokamak Energy is developing significant additional space at its Milton Park headquarters, as it accelerates its technological and commercial plans. This will enable further landmark achievements with the ST-40 in the future.

Chris Kelsall, CEO of Tokamak Energy said: “We have the most advanced spherical tokamak in the world and we are a global leader in HTS magnets. We already combine world leading scientific, engineering, industrial and commercial capabilities under one roof. This expansion underpins our vision to pioneer commercial fusion energy, which is clean, economic and globally deployable. We will continue to attract the best talent here in the UK and globally, as we develop the fusion power plant of tomorrow, while commercialising the technology we have already developed.”

Business & Energy Secretary Kwasi Kwarteng said: “We need trailblazing companies like Tokamak Energy to harness the power of fusion and demonstrate its remarkable potential as a potentially limitless, clean and safe source of energy for the future.

“It was fantastic to visit Tokamak Energy today to see first-hand how they are doubling down on their efforts to commercialise fusion, expand their site and create 160 new high-skilled jobs – a massive boost to our plans to support the rapidly growing fusion supply chain across the UK and to cement our position as a global science superpower.”

The UK is a global centre for the development of fusion, a new source of limitless clean, carbon free, safe and secure energy that will be essential for deep decarbonisation well before 2050.

Watch the official BEIS video of the visit to Tokamak Energy

Tokamak Energy is a leading global commercial fusion energy company based near Oxford, UK.  The company is developing the fusion power plant of tomorrow while commercialising the tech applications of today.

Tokamak Energy is pursuing fusion through the combined development of spherical tokamaks along with high temperature superconducting (HTS) magnets.

In the ST-40 fusion prototype, Tokamak Energy has developed the most advanced compact spherical tokamak in the world – a key enabler of commercial fusion.  Plans are underway for the ST-40 to operate at 100m degree plasma, which will be a key milestone for commercial fusion and the first privately funded fusion module to reach this landmark globally.

Tokamak Energy received five US Department of Energy grants in 2020, creating partnerships with leading expertise in the US National Laboratory System.  The company is partnering with Oak Ridge National Laboratory and Princeton Plasma Physics Laboratory to develop the ST-40.  It has also received a £10m grant from the UK Government as part of investment under the Advanced Modular Reactor (AMR) programme.

Tokamak Energy is working with CERN, the European Organisation for Nuclear Research, on high temperature superconducting (HTS) magnets, in developing a proprietary technology that will scale to the large magnets necessary for fusion power modules.  HTS magnets also have applications for particle accelerators, aerospace and for several other industrial sectors.

The company, founded in 2009 as a spin-off from the Culham Centre for Fusion Energy, currently employs a growing team of over 160 people with talent from the UK and experts from around the world.  It combines world leading scientific, engineering, industrial and commercial capabilities.  The company has more than 50 families of patent applications and has raised over £100m of private investment.

Once realised, fusion energy will be clean, economic, and globally deployable – a key enabler for meeting international climate policy goals.

In recent years, Tokamak Energy has completed a series of demonstration projects on a rapid… 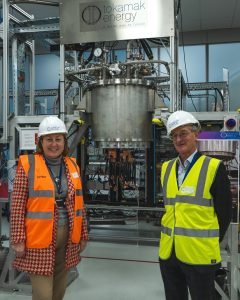